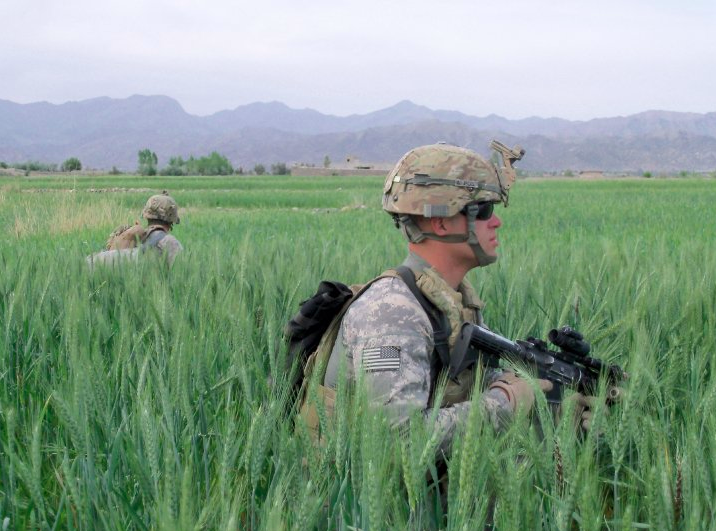 Any veteran who has seen combat has been assuredly asked two questions by anyone back home. 1. Did you kill anyone? 2. Were you scared?

This entry refers to that second question.

I cannot speak for all combat vets – only myself – but I really can’t remember too many times where I truly felt ‘scared’. Most of the times we were engaged in combat, it was like an all out adrenaline rush which required very little ‘feeling’ and a great deal of ‘reacting’. Sometimes your adrenaline is surging so greatly that it is almost like a disappointment when a firefight ends – like a rollercoaster ride coming to a stop. And we went on so many missions, were in so many dangerous situations, were so constantly on the go, that I think you eventually turn ‘machine-like’ and just shut everything off. Fear doesn’t really exist anymore.

We went into a small village at around 0400 in March or April of 2010. It was really early in the morning and still dark. Most of our missions took place at night, so we were used to the darkness.

On this particular mission, it was believed that terrorists were hiding weapons, paraphernalia, explosives, and the like in this tiny little market place. So we had to go in there before the shops opened, and people were present, and raid all of the stores in search of weaponry.

So, shop by shop, we went through the tiny market place looking for weaponry of any sort. After we had searched the whole village, we had found nothing.

The sun was starting to come up, however, and villagers were beginning to come into town. Slowly, we watched shop owner by shop owner look exasperated and angered that their store had been broken into.

So, in an effort to make ammends, we started handing out brand new locks to make up for the ones we had broke (you can see a picture below of us handing out a lock to a shop owner).

Then, people began flocking us for locks – mobs – even non store owners wanted them and thought we just had unlimited amounts. Frantically, we passed out as many as we could, but eventually, of course, they ran out. Then an eerie thing happened.

The whole village evacuated in the blink of an eye. Everyone just left.

This was strange for a few reasons. 1. It was a prime shopping time of the day. Around 9am – when villagers were most active. 2. It was strange that they all left at once. 3. It was Saturday – one of the busiest days of the week for shop owners. As the 27 of us tried to figure out the next move, a strange silence hovered over the village.

We (not really ‘we’, but our leaders which I wasn’t one of) started coming up with a plan. Were talking and discussing what we should do next.

A huge explosion less than a click to the East of where we were standing.

Each of our Squads (there were 3 squads of about 6-10 men) went to our pre-planned rally points.

Alpha (the squad I was in) took cover in a small 15×10 goat stable made of mudbrick.

And Charlie took cover in a school like building with gunners positioned on the roof.

The explosions didn’t stop. We were getting shelled like crazy. RPG’s, recoilless rifle rounds, and small arms fire. Just continual incoming. The rounds were coming at us from across a big open rock field.

There was our goat stable, then about 200 yards of a rock field, then the building they were firing at us from.

My squad leader, Jonathan, told our SAW gunner, Chad, to start firing out the front window of the goat stable. Our team leader, Lyle, helped direct his fire and feed rounds into the automatic weapon. Jonathan told me to lean out the side door and start firing my M4 across the field towards the guys that were firing at us. Round after round was continually shaking our little stable. It was chaos. The repercussions were so strong that a gunner from Bravo was knocked off of the roof of their two story building. I remember it was hard to see where I was shooting because so much dirt and dust was being shot up into my eyes. That was one of the few times I remember thinking ‘I want this to end’.

And then it did.

Well… it took a break, actually.

Their firing stopped —- for a moment —- as their ‘fighters’ (notice quotations) went into the building they were shooting at us from, gathered up their families into their arms, and then came back outside and started firing at us again from behind their women and children.

They knew  we wouldn’t fire back if there were women and children on the battle field. Some guys were actually holding babies in one arm and firing their rifles with the other.

So, for a moment, we just had to sit there and take the shelling, unable to return fire.

Our Platoon Leader (PL) Ryan decided to call in a ‘show of force’. This meant some F-16 fighter jets (like you see at a fly over at a football game) would fly over head very low to the ground. They wouldn’t fire at the terrorists, but we hoped it’d be enough to scare them away – if you’ve ever seen a flyover at a sporting event you know how loud and intimidating the jets can be.

It worked. The terrorists retreated back into the building they were firing at us from.

Then came the call from the PL: “Alpha, we need you to go raid that building. Go after those guys. Bravo and Charlie will stay back and cover you from this side.’

So, the 6 of us in Alpha – Jonathan, Lyle, Chad, David, Matt, and myself had to walk across the big open field, and into the building that was full of the guys who had just been shooting at us.

I remember feeling pretty paranoid as we walked across the field. We were right out in the open. Sitting ducks. No form of cover around us. Every step was pretty nerve rattling. The 200 yards we had to walk across the field seemed more like 200 miles (the field is pictured below). Lyle and I looked at each other nervously – probably scared – but it was all good – and we grinned.

We made it across the field uneventfully. Nobody fired at us. But that was only step 1. Now, we had to bust into the house where these terrorists were hiding.

We crept up to the door way, which was like two big metal doors held together by a locked chain (wonder if we gave them that lock?). My squad leader went to kick down that door but the chain didn’t break.

Now, they knew we were here from the metal racket that kick made. My squad leader, Jonathan, got out bolt cutters and began to cut the lock open. In that moment I felt scared.

That was one of the only moments I can remember, from Afghanistan, feeling scared. I thought ‘In a second that lock is going to be cut open. And we are going to have to run into that building full of a bunch of guys who had just been trying to kill us a few minutes ago. And they already know we’re here because of how loud the door kick was. This is scary.’

And then – as I was thinking that –  Jonathan jumped back from the door ‘Fuck! There is someone right on the other side.’

It was go time. We couldn’t look back now. We busted through the door and began raiding the house.

We had trained for this scenario (raiding houses) many times – and had been on many missions where we had to quickly and efficiently make our way through every room of a house looking for any possible ‘bad guys’ or weapons. We were a good team and we trusted each other and we were pretty methodical in our ability to clear an entire building.

So we went to work. Lyle and I peeled off into the first open room and scanned/searched the inside utilizing the routine we had done so many times.

Dave and Chad bounced past us to the next room – Jonathan and Matt went to the third. Within a matter of minutes we had cleared the entire building.

And guess what we had found? Nothing.

There was not a soul in there.

Just a noose hanging from the ceiling in one of the rooms.

They must have all escaped out the back before we got in. And the final guy (the one my squad leader saw before we busted in) was the last to leave.

Later on that day, the firefight continued as the terrorists started firing at us from another building (while we were actually still in the first building we searched). It was a bit of a hairy situation as Bravo and Charlie couldn’t support us because we were in between them and the bad guys.

I will spare you the rest of the details, but we received no casualties that day, other than the guy who fell of the roof of the building (he got a concussion).

The point of the story is I was scared for nothing. One of the only times I felt fear over there (just as we were about to raid the building), and it was for nothing – there was nobody inside.

Isn’t that the way it so often goes in life? We get ourselves worked up – full of anxiety – scared – over things that actually never end up happening. ‘What if I ask and this person says no?’ ‘What if I look stupid’ ‘What if I fail’ ‘What if this happens’ ‘What if that happens’ – and we scare ourselves out of greatness!

They say 94% of the things we worry about and/or are scared of happening never actually occur – they are just scenarios that we make up in our own heads. You only need to look at the billions of dollars insurance companies make as proof of our constant unwarranted fears – we pay hundreds of dollars, maybe thousands, every month just so we’re covered in case we get sick and have a HUGE medical bill, or get in a car accident and our car is totalled, or our house burns down or there is a flood. How often do these things actually happen?

So, take a stand today and eliminate fear in your life. That is no easy task. But try – slowly – to replace every ‘What if negative happens?’ with ‘Imagine how awesome this would be if positive resulted?’. Every time an unwarranted fear thought pops into your head replace it with a thought of how awesome things are going to turn out.

Because your mind is powerful.

Don’t scare yourself out of greatness – out of the real you that you were meant to be – courage yourself into it. 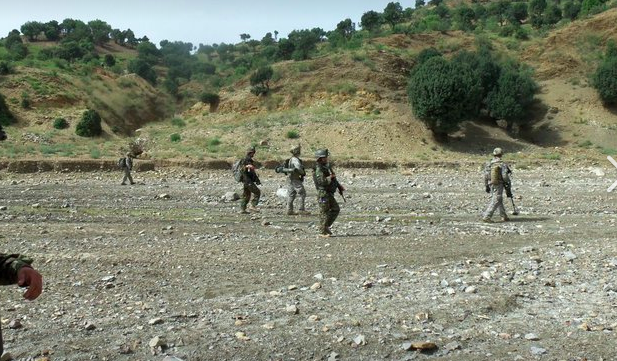 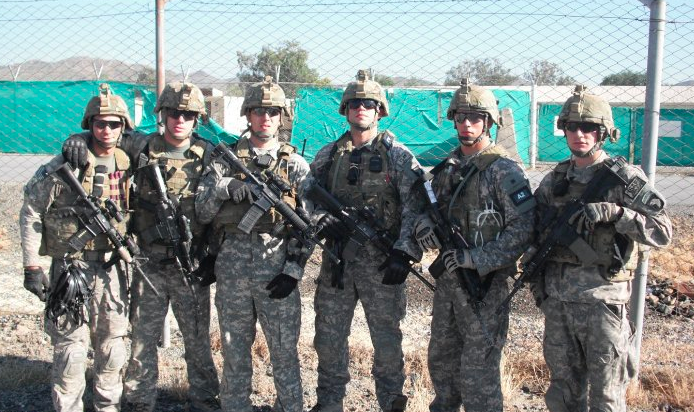